A Day in the Life of An HVAC Tech 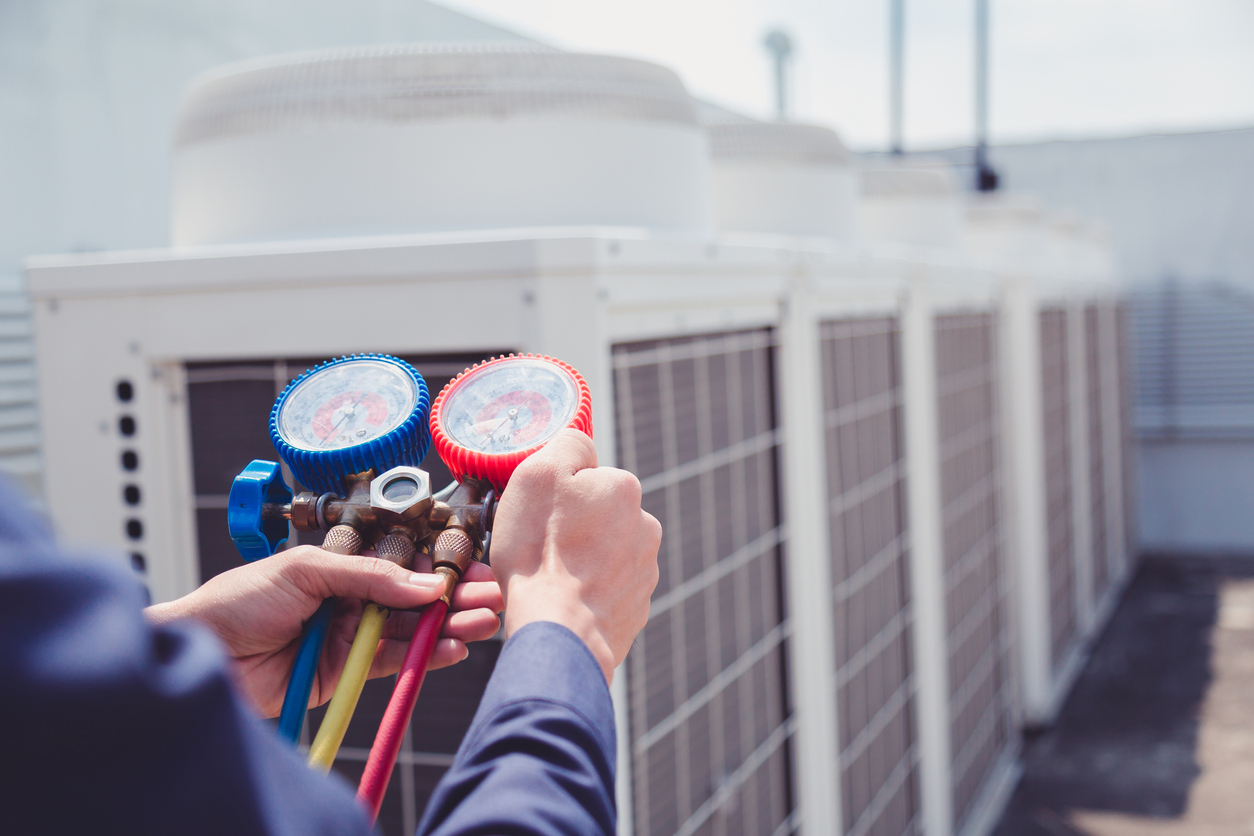 They fix your AC when it’s broken. They keep you from freezing on a cold winter night. And they occasionally deliver some bad news when something needs to be replaced. Your HVAC tech is always there for you when your HVAC system breaks. Here’s what it’s like to walk a day in their shoes.

(And if you think it’s a job that could be the perfect fit for you, check out our careers page.)

6 am: Jason grabs a cup of coffee on his way out to his truck – the mobile office – and heads to his first call.

7:00 am: Jason drives up to a home to perform a maintenance check for a long-time contract customer. He greets him at the door and the two chat about the hot July weather, kids, work, and more as Jason inspects the HVAC system. After replacing a few air filters and changing some settings, Jason says, “Looks good! See you next time” to the customer and heads out.

8:45 am: On his way to his next service request, Jason receives a call from dispatch. A young couple with two infant children is experiencing issues with their air conditioning. It broke an hour ago and one of the kids is becoming overheated.

8:50 am: Jason changes course and heads over to the house with the broken air conditioning. Dispatch calls another tech to cover his maintenance check. Heat stroke can be fatal, and young children are especially vulnerable. It’s crucial to get the AC running in the house as soon as possible in the 100-degree summer heat.

9:15 am: Jason arrives at the house and notices the young mother and two kids are playing a game in the car with the air conditioning running. The father greets Jason at the door.

“Hi, what’s your name? How soon can we get the AC up and running? I took off work to try and fix it and my two kids really need to cool off. What could’ve caused the problem?”

Jason spends 15 minutes explaining the process to the father, answering all of his questions and getting a brief history of what happened. After talking with Jason, the father is still anxious but more confident Jason is doing all he can.

9:30 am: Jason heads down the stairs, crossing his fingers that they won’t have to wait for a part and the HVAC system isn’t too badly damaged. Having two young kids is expensive—the less money the family has to spend fixing it, the better.

9:32 am: Jason starts to inspect the evaporator coil, blower motor, and air filter. It’s hidden behind a stairway in the basement and was installed in the last few years. Everything seems good here.

9:40 am: Jason heads out into the heat to look at the outside unit. He notices that it has been quite some time since the delicate AC coils were cleaned and there’s debris around the unit. This could be part of the problem.

10:30 am: Jason has spent the last hour cleaning out the coils and clearing leaves and grass clippings away from the unit. Now that he can see, he notices that one of the refrigerant lines has a leak.

10:40 am: Using EPA-compliant methods, Jason cleans up the refrigerant and repairs the line. Luckily, he has a well-stocked truck and the homeowner won’t have to wait around for a new part.

11:30 am: After completing the project, Jason gets back in his truck and leaves the homeowners and happy kids behind. The two young ones are cooling off in front of the TV with Mom, while Dad walks Jason out.

“Thank you so much, Jason. The kids are much happier now.”

12:00 pm: Jason eats his lunch in the truck as he drives to his next service call. Thanks to the tech who covered his previous call, he’s not too far behind. He can still make it to the next house in the allotted time span.

1:00 pm: As he pulls up to the next house and starts to get his tools out of his truck, he notices the homeowner walk outside to greet him.

“Hi, I’ve been dealing with some on and off issues for a while. I think it’s the refrigeration lines. There must be a leak somewhere – it’s not cooling as much. I was looking at the parts online, but apparently, you need a certification to install them?”

Jason explains how he is CFC certified to handle refrigerant, as well as NATE certified. He went through years of training as an HVAC apprentice to become a service tech.

1:30 pm: After talking, Jason and the homeowner walk over to the outdoor AC unit. The homeowner stands nearby and points out what he thinks the problem is, while Jason inspects the unit. He doesn’t see any signs of leaking lines, and the unit is clear of debris. He suggests that they look inside.

1:35 pm: The homeowner shows Jason where the evaporator coil is.

“The evaporator coil really seems fine. It looks exactly like this picture.”

He holds up his phone. Jason nods and looks over the coil, explaining what he’s looking for to the homeowner.

1:40 pm: After discussing the coil with the homeowner, Jason doesn’t think that’s the problem. He goes to inspect the ductwork, encouraging the homeowner to come with him so he can explain what he’s looking for.

2:00 pm: Jason thoroughly inspected the ductwork with the homeowner and has some bad news. The ductwork isn’t properly set up through the house. In fact, the ducts get wider the farther away from the unit they go, so the air loses momentum. The rooms farthest away from the unit aren’t getting properly cooled.

“I’ve never heard of them getting smaller. What does that do?”

Jason explains how ducts work to the owner, comparing it to the human circulatory system. He shows him how they should work and explains the science behind moving the air adequately throughout the home. After some discussion, Jason gives the homeowner a quote and points out their financing options and specials page.

The homeowner takes the quote and walks Jason to the door.

“Bye Jason. Thanks for your help!” The homeowner waves as he drives away.

2:30 pm: Jason drives to his next call and turns his truck’s AC on high, trying to cool down after working in the heat. He heads to a preventative maintenance call, thinking about what he’ll do when he gets home at around 8 pm tonight. During heat waves like today, a normal day goes from 7 am to 7 pm. He still has four more calls to go.

3:00 pm: Jason arrives at his preventative maintenance call and offers the homeowner some advice on keeping debris cleared away from the outdoor unit. He tightens a few loose parts to alleviate some noises the owner has been hearing.

4:00 pm: Jason arrives at another service call. This one came in as an emergency. Another company had recently installed a brand-new ductless air conditioning unit for a home where a husband and wife team and their elderly in-laws live. The air conditioning unit broke at noon today and the couple is worried for the husband’s father’s health.

4:15 pm: After speaking with the couple, Jason is inspecting the outdoor unit and groans inwardly. It’s a brand he hasn’t worked with before and one run by an intricate control system. He hooks up his diagnostic tools and checks the refrigerant levels of the unit.

4:35 pm: The wife stops by to see how things are going. Jason explains to her what he’s doing, and possible issues that could be happening. She pauses to watch what he’s doing.

4:40 pm: Jason has to call the manufacturer’s technical support to confirm some thermistor values the unit should be reading. He explains what he’s doing and calls support. The wife raises her eyebrows and watches as he confirms the different numbers.

4:50 pm: Jason adjusts the settings, fixes a loose connection, and suddenly the air conditioning kicks on in the house. The homeowner claps her hands and pats Jason on the back.

“Nice work! I was so worried it would take longer!”

5:00 pm: Smiling, Jason discusses maintenance plans with them and heads to his next service call. He hopes the happy family will become long-time customers.

The reliability of your air conditioning is crucial to the health of you and your family. Your HVAC tech is the person you call when something has gone wrong. That means that their day is full of problem-solving in a variety of different situations. There’s always something new in the HVAC industry.

Unfortunately, fewer and fewer students are choosing to enter the trades. At Rod Miller, we work hard to bring up our own apprentices and turn them into service techs. By working directly with local high schools and colleges, we teach apprentices not just how to do a job, but how to succeed in a career. Are you looking for a new career where you can serve people? Try out the HVAC field. Check out our careers page.